​Music Education: the Pulse of Primary Schools for the Future 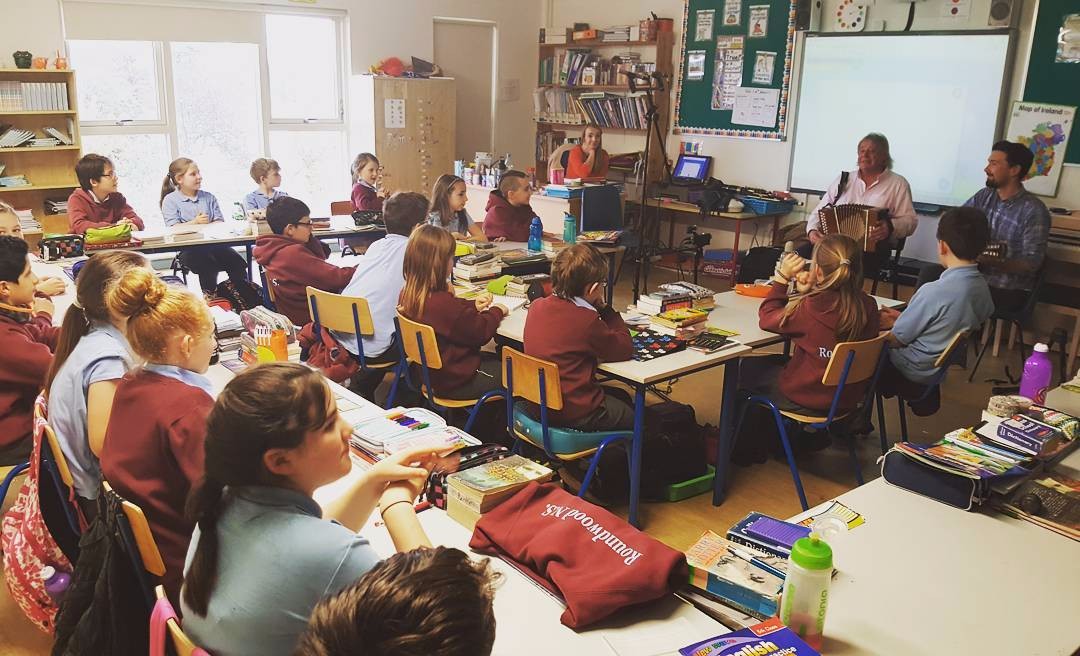 I asked my dad recently about how he learnt music in primary school when he was growing up in Belfast in the 60’s. He told me about the BBC radio show "Singing Together" which broadcast every Monday morning at 11am. Classrooms across the country would tune in and sing along to songs covering everything from traditional folks song like ‘Cockles and Muscles’ to cowboy themes like ‘The Streets of Laredo’ - my dad's personal favourite.

This program was started just after the beginning of the 2nd World War and ran for 60 years. At one point, there were as many as 8 out of 10 schools tuning in. While ultimately it fizzled out due to dwindling listenership and a focus on a more structured curriculum, it was still an incredible feat to create a weekly national chorus all centred on enjoying music and having fun in the classroom. That’s why it is still so fondly remembered by people growing up in that era like my dad.

In recent times in the UK, music education in schools has seen funding and investment cut with the subject given less and less priority. The less funding the easier it is to lessen the priority and all in all it becomes a vicious circle. However there are seeds of rejuvenation and now perhaps it’s time to learn from what was achieved in the past and decide how best to reverse the trend on a national scale.

Last week, Leo Varadkar announced the Irish government’s plan to reignite the focus on arts education within schools. The Creative Youth programme (part of the new Creative Ireland Programme) seeks to give every child in Ireland practical access to education in music, art, drama and computer coding within the next 5 years. The intention of the government is that we don’t know what the future will hold in terms of jobs or societal challenges, but that the solution is to create a country where people think creatively and can adapt to an ever changing world.

I doubt there are few people who would discredit the value of children learning music in primary schools but, with this renewed government focus, why is now the right time for it to become the heart beat of our schools’ curriculum? Below are three reasons why I believe Ireland is poised for this music revolution:

1.) Music can help improves students’ performances in other areas

Back in October, The Guardian released an article called ‘How to improve the school results: not extra maths but music, loads of it.’ The report told the story of Feversham Primary Academy based in Bradford.

In 2013, the new Head Teacher Naveed Idrees developed a program where children would spend up to 6 hours a week learning music. Mr. Idrees said when he came to the school, it was performing 3.2% behind the national average in English. Since then and as of 2017, 74% of its pupils have now achieved the expected standard in reading, writing and maths, against a UK national average of 53%. Other improvements saw the school’s attendance level rise, an improvement in staff morale, as well as a visible increase in student confidence.

All of this sounds very nice and is something people have thought for years, but what is it about music that improves these things? Is it just that music is notionally better for student performance or is there more substantive proof?

At a conference in 2013, Gottfried Schlaug, an expert on music, neuroimaging and brain plasticity from Harvard Medical School, summarised recent research findings stating, “Listening to and making music is not only an auditory experience, but it is a multi-sensory and motor experience. Making music over a long period of time can change brain function and brain structure.” The research concluded that the point at which musical training begins to affect brain anatomy as an adult is commencing this training before the age of seven.

This means that engagement in music actually develops the brain to help with things like memory retention, boosted creativity levels and a greater capacity for learning. According to US-based music education company Children’s Music Workshop, the impact music education can have on language development can be tangibly demonstrated in development of the brain, “Recent studies have clearly indicated that musical training physically develops the part of the left side of the brain known to be involved with processing language, and can actually wire the brain’s circuits in specific ways.”

This is hardly surprising information, but with the evidence from Feversham Primary Academy as well as new research showing how music physiologically affects a child’s brain, there’s arguably never been a more compelling time for primary schools to invest in their music education program.

Back in March of this year, Minister for Education Richard Bruton proposed reforms to primary schools where children would not study traditional subjects until as late as 10 years of age. Instead there would be a greater emphasis of creative play during these years. The proposed reforms are inspired by the high-performing education systems in countries such as Finland.

As part of this proposed model for Ireland, teachers will have greater autonomy to decide the amount of time dedicated to particular areas of learning. Subjects such as Maths, English and Irish will still remain core for approximately 60% of the day but the remainder will be at the discretion of the teacher to decide on the particular areas of learning.

In the example of Finland - music is a mandatory subject for the first 7 years of a child’s schooling. The syllabus is learner centred which means it promotes the value of active experiences such as playing instruments, singing, composing and listening. Timo Klemettinen, former Managing Director of the Association of Finnish Music Schools and now head of the European Music School Union has stressed the importance music education plays in a child’s schooling experience, “In the first four grades, development of the learner’s musical expression through playful and integrating activity is central. The instruction has to give the learners experiences with a variety of sound worlds and music, and encourage them to express themselves and give real form to their own ideas.”

Whether it’s learning songs or creating as part of a group, music lends itself in a very practical way to be taught through play. While the timeline of when this reform might come in the Irish system is still unknown, an expansive music curriculum is a positive first step in helping a primary school to deploy a program focused on this new method of teaching. This, in itself, could serve as a pilot for future subjects to adopt this play-based learning.

The Irish Primary Principals Network (IPPN) released a study earlier this year which looked at the increasing anxiety levels among primary school children in Ireland. Many reasons for this increase were cited and included the stress levels from parents at home being transferred on to their children. The research also showed that this is not an issue which is impacting one particular social demographic - it is being seen across the full spectrum of schools in the country.

Various initiatives have been developed and implemented including the Friends for Life ’10 week program’ which uses cognitive behavioural therapy to help children in reducing their stress. Similarly, a number of tips have been promoted by A Lust for Life including listening to children’s fears and focusing on building confidence. One wouldn’t disagree that all of these supports should be championed within the education sector to help reduce this growing issue, but another very obvious solution is to develop the music within a school.

Let’s say we were to look at what music could do to increase a child's confidence - a primary cause of childhood anxiety.

A key aspect of making music, and one of the most enjoyable, is playing as part of a group. It teaches you the discipline of playing in time with others and to be part of a team with the one common goal of creating music. There can be a huge sense of achievement from doing this particularly when everyone is working together and feels a valued member of that team. This sense of achievement helps build confidence and often long-lasting friendships.

These early positive experiences with music can start a chain reaction in a child and encourage them to develop their talent further. This is what happened to me when I was growing up. From a great primary school music curriculum, I took up an instrument, I then got involved in playing in groups and this led to doors being opened I couldn’t have imagined were possible. It’s still opening doors for me to this day.

I won’t claim music is the silver bullet for handling all aspects of childhood anxiety but, as one component as part of a full solution in tackling the problem, it’s a fantastic outlet which builds confidence and reduces stress. The lifelong friends I’ve made from music, I know, would attest to this.

To conclude, music has always been relevant in our classrooms, it just so happens that certain Irish political and societal factors are arguably making it more relevant. However, even if the factors I've mentioned didn’t exist it would still be a worthy thing to do. Recently, Australian parenting guru Steve Biddulph was interviewed by The Irish Times talking about reducing stress in girls. He talked about the community and environment we nurture for young people in Ireland. He said, “Mums and dads who are part of their community and bridge them to interests, sports, hobbies, arts and music, [help] kids feel [that] they really do have a village. I think that in Ireland you do these things rather well, and just need to get back to that, even in urban environs, to build back community strength. None of us can raise kids alone.”

Through our work in Dabbledoo, we are lucky enough to visit classrooms across the country and see the impact music can have on a child's development. We see how it can benefit students by share an experience like music within their peer group. However, we also see how it’s a shared experience between the teacher and their students and, consequently, the school and its students.

Taking it further, if you look at school concerts and shows, these are a great way for parents and the wider school community to come together and share in this tradition. So, not only can music help children develop through their education, it can also be the pulse of our primary schools and the surrounding community they serve. That itself, is reason enough as to why we need music in education.

If you would like to find out more about how our school program can be used to deliver the Irish primary music curriculum in your school, click below to sign-up for our free 30 day trial: 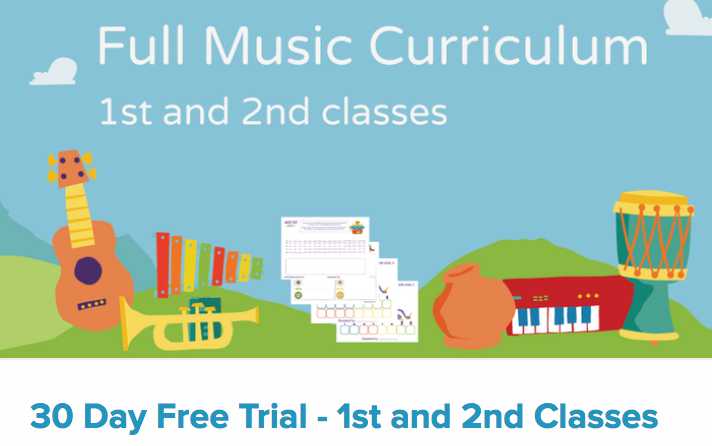