​7 Subjects To Integrate Music With In The Classroom

Music is a versatile subject to incorporate into lots of other subject areas. Whether it’s coming up with a song to help the children remember times tables or to get them listening to a particular style during an art class there can be a lot more scope to bring music into the classroom than you might realise.

Increasingly schools are moving towards incorporating monthly or bi-monthly themes from which they can tie multiple subjects in together. By integrating these themes it can be a very enjoyable and motivating way for children to learn. In order to successfully plan and integrate music into the chosen themes, the Irish primary music curriculum advises the following:

• the music component should be meaningful and consistent with the curriculum.

• there should be a manageable number of strands or subject areas included.

We have written this blog to look at some other curriculum subjects and give you ideas as to how you can tie music in with them.

- Playlist for your art class - while the children are working on any art projects, why not put on a playlist of songs which are either from the curriculum or in-keeping with the curriculum. This could also be applied to silent work being done in any subject. Here’s a Spotify playlist of suitable pop songs which we created that you can play in the classroom:

- Drawing graphic notation symbols - part of the learning for music notation is getting children to come up with their own ways of notating sounds. This can be achieved by creating a similar type of notation to traditional notation or it could be using the children's drawings to represent a sound such as noises from animals or household appliances.

- Learning Irish through songs - Irish can be a notoriously tricky subject to keep children engaged with and learning songs in Irish can be a great way bringing the language to life. Our advice is to pick songs which have a simple melody and text (such as Trasna na dTonnta) or to pick songs the children will recognise. An example of this is the Irish version of Bastille’s ‘Pompeii’:

- Practicing phonics - an important part of a child’s early language development is their ability to comfortably form the various syllabic phonics. Doing these as a rhythm or in a sequence is a great way to practice forming the sounds naturally. An easy place to start is with the curriculum’s method for representing crotchets and quavers as ‘ta’ and ‘ti-ti’.

- Relating music to stories/poems - coming up with songs or musical accompaniment to stories or poems you are covering as part of the English curriculum can help the cross-over between these two subject areas. An easy way to deliver the composition strand of the music curriculum is to take a poem the class has learnt and add music to it. This is an easy place to start as poems tend to have a natural rhythm to them and, if they rhyme, there’s usually a natural cadence to them.

- Subdividing rhythms relate to fractions - the structure and breakdown of rhythm is the exact same process of breaking out fractions: 1 semi-breve = 2 minims = 4 crotchets (see diagram below). This mirrors fractions in maths where 1 whole = 2 halves = 4 quarters etc. 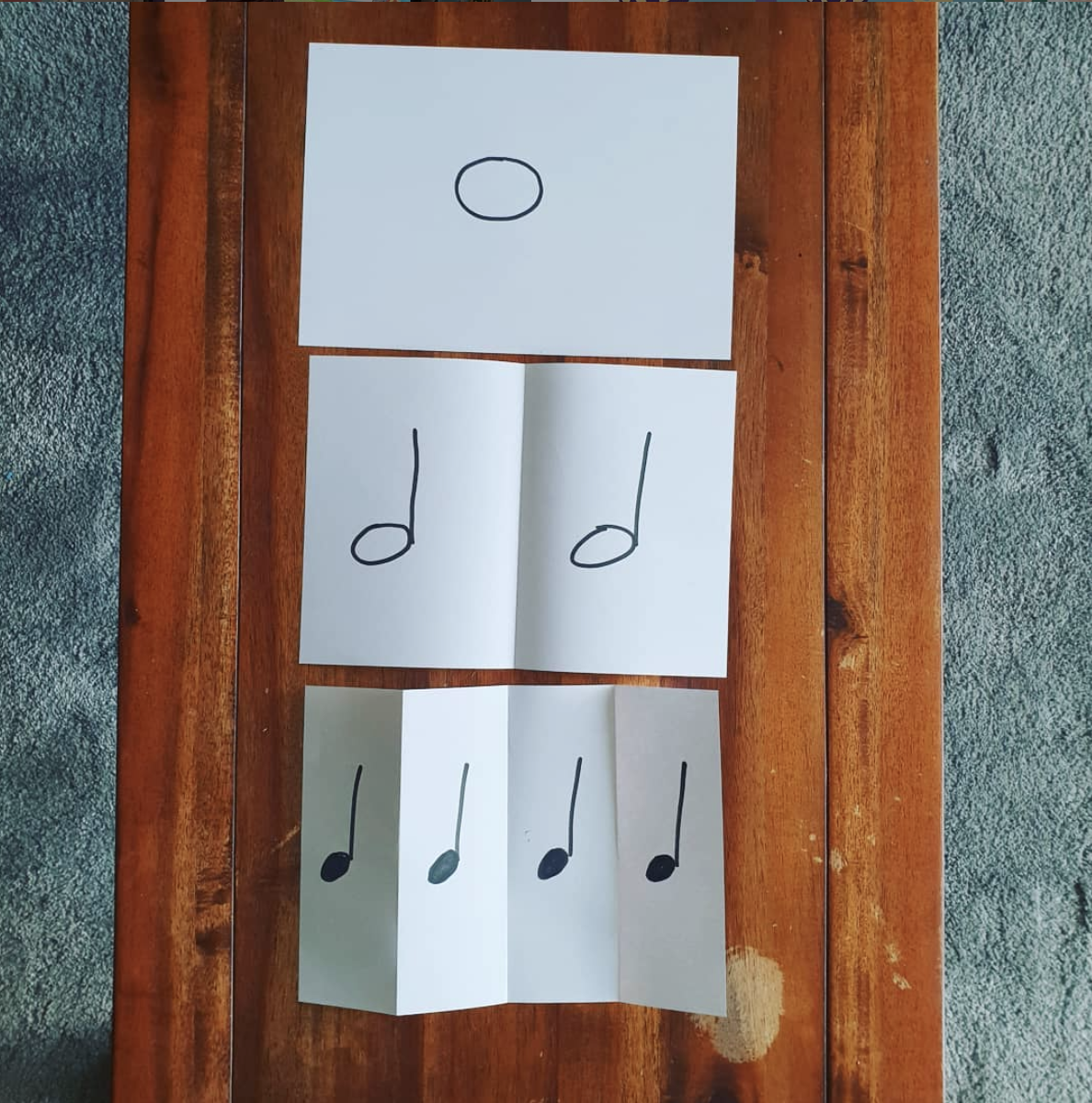 Getting the class to clap the breakdown of these to a 4 bar phrase is a simple way of visually seeing and hearing the fractions within a bar of music. You can try our Igor the Octopus resource to put into practice an exercise in subdivision: 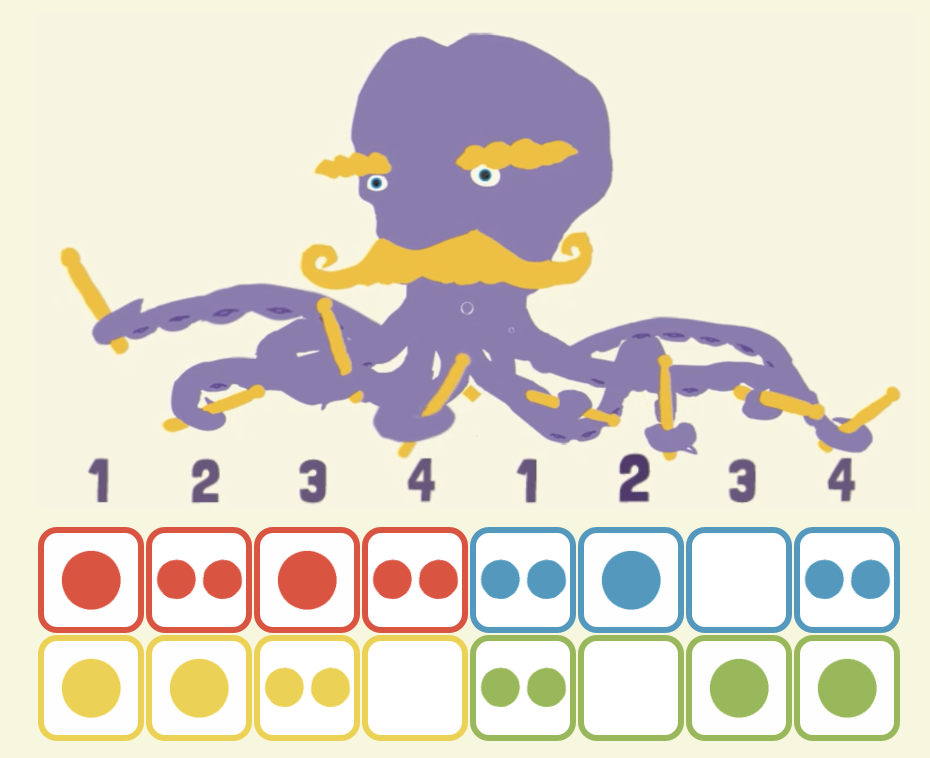 This can then be used to equate intervals in music to intervals between numbers. So when people refer to going up a 5th from C they mean going to G. Our Jazz Cat resource can help you map out and compose using a full scale so that the class can understand each note's position within that scale.

- Exploring sounds - understanding the mechanics of how, firstly, an instrument is played, then the sound waves it creates when it enters your ear and then finally how your brain processes that sound. A good way of testing this is playing different sounding instruments and objects to explore sounds. What happens when the object is struck harder/softer or closer or further away? How does the room the sound is made in impact the sound? Ask the children to describe how these various elements impact the sound created. 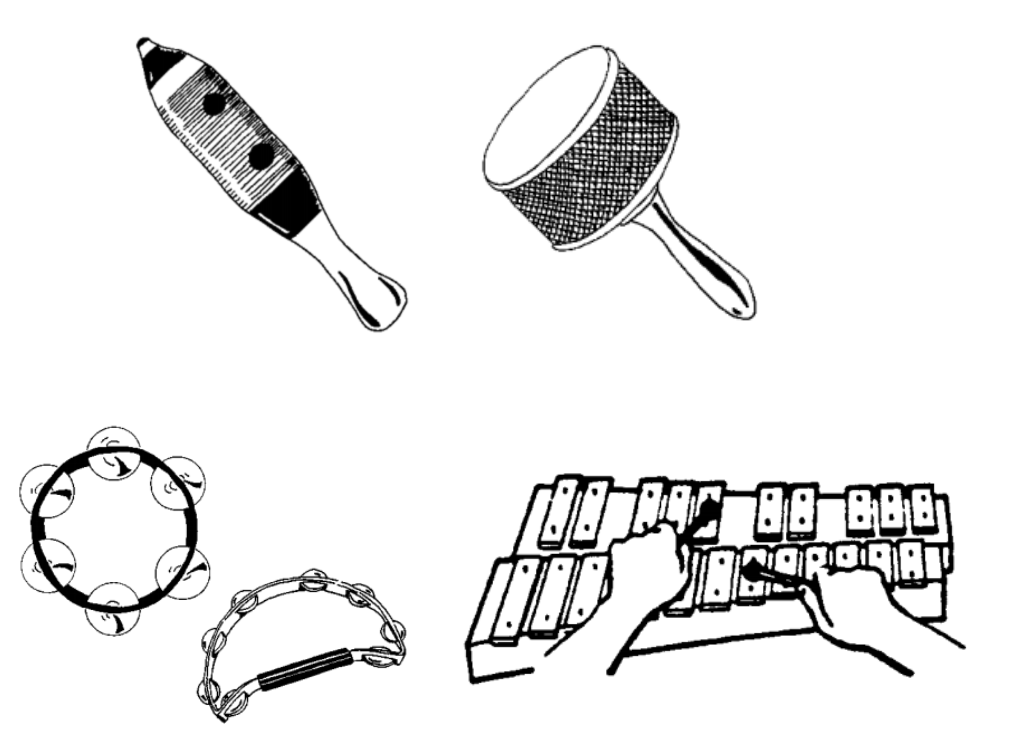 - Making your own instruments in the classroom - a step beyond exploring sounds is by getting the class to make their own simple percussion instruments. The easiest of these to make are shakers which can be made by simply pouring rice or dried beans into a receptacle with a lid such as a jam jar or a drinks bottle. This can be a good exercise to help children understand how different materials make different sounds such as plastic or glass. Our friends at Recreate have lots of resources perfect for instrument making.

◦ Beethoven's Symphony No. 3 'Eroica' - Beethoven admired the ideals of the French Revolution, so he dedicated his third symphony to Napoleon Bonaparte… until Napoleon declared himself emperor.

◦ Band Aid ‘Do They Know it’s Christmas’ - written and recorded to raise money for the Ethiopian famine in 1984.

◦ Black Eyed Peas ‘Where’s the Love’ - this song came out 2 years after the 9/11 attacks and aimed to promote a positive message amid the Iraq war.

- History of music - learning about the development of music and how one style inspired the next. A great example would be looking at the development from the 1950’s up until now and how musical trends have evolved. Here’s an example: 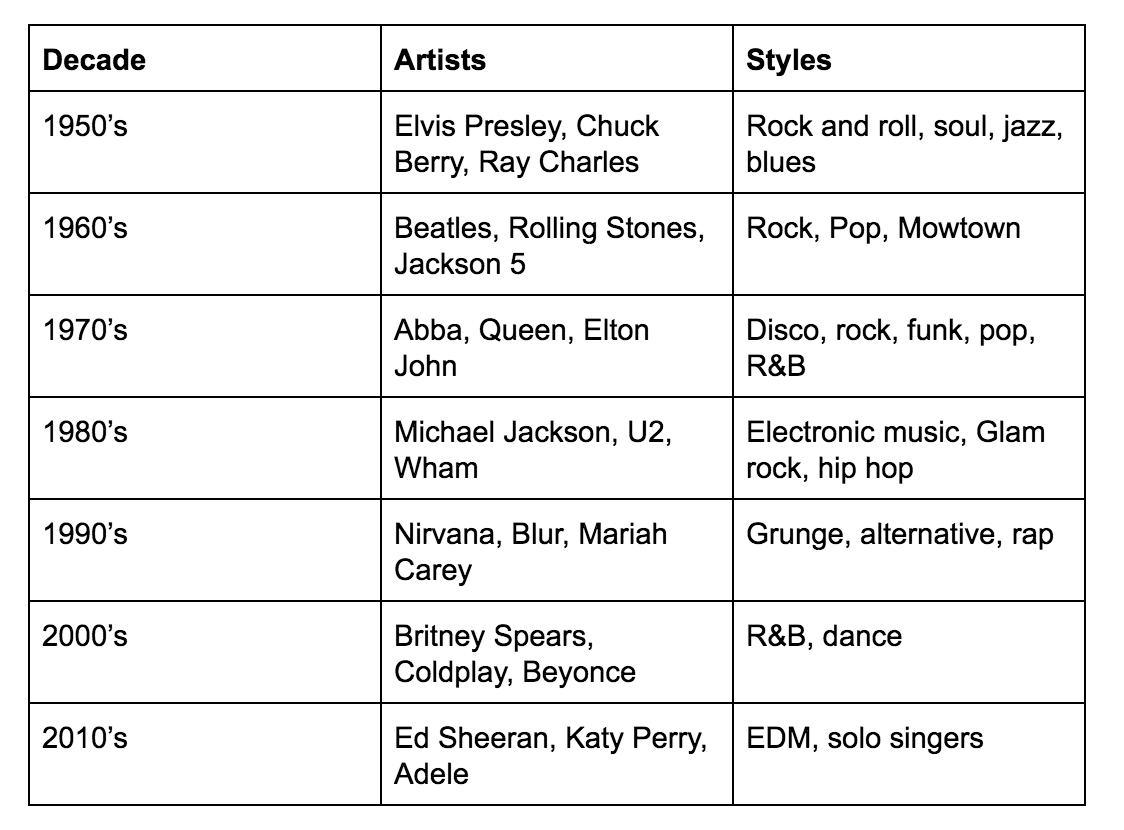 - Dance - music and movement go hand in hand with music and one of the best ways to help children to understand the concept of a beat or pulse is to get them to dance to it. An easy exercise to start with is to learn the distinction between 4 time and 3 time. A simple example of 4-time is to get the children walking round the classroom in time to a march (such as Darth Vadar’s theme from Star Wars). A simple example of 3 time is to have the children dance round the room to a waltz (such as The Blue Danube). An idea of how to move in the classroom to a waltz would be to ask the children to take a big step every time there is the 1st beat and two smaller steps for the 2nd and 3rd beats.

- Inventing movement or actions - as part of an exercise where you are asking the children to come up with new sounds and symbols for their own graphic notation, you could also extend this and ask them to pair this sound with a movement or action. This could be as simple as a particular way of clapping or it could be a more physical action such as a star jump or a dance move.

Integrating music with other subject areas will help a child’s progression in both subjects. This list is only to get you started so get creative yourself and explore other subjects or ways to tie music to other activities in the classroom. Sometimes, asking the children to come up with their own ideas for integration can produce some the best ideas!