​4 Piece of Music For Studying The Easter Rising 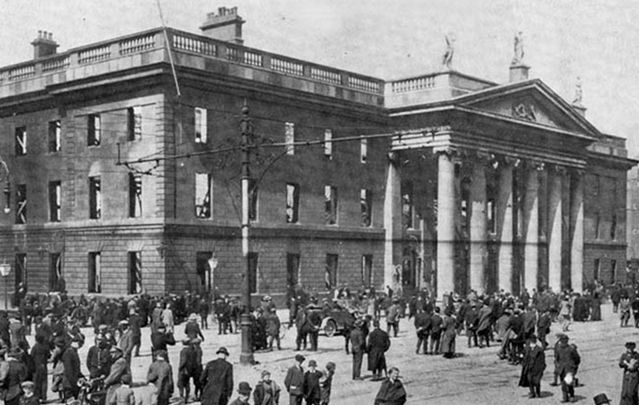 Ireland’s song writing tradition has for centuries been inspired by many of the political and social events throughout the nation’s history. One of the most important of those is the Easter Rising of 1916 which ultimately led to the state’s independence in 1922.

In 2016, the nation celebrated the centenary of 1916 and one of the key ways the anniversary was marked was through the songs and music of the time or pieces which were subsequently inspired by the rebellion.

As the Easter Rising continues to be an important element of the Irish primary school curriculum, we wanted to look back at some of the most iconic pieces written about that time. Below are 4 pieces we’ve picked which can be listened to or learnt as songs in the classroom. We’ve also included some information on each of them which help give an insight into the story of the rising and the attitudes of the nation at the time.

Grace was a song written in 1985 by Frank and Seán O’Meara and tells the story of a couple’s marriage minutes prior to the husband’s execution due to his involvement in the rising.

Here is a summary of the meaning behind the song from Jim McCann of The Dubliners:

"Grace is a song about a woman called Grace Gifford who was the child-hood sweet heart of a man called Joseph Plunkett. Joseph was a poet and a patriot and was also one of the signatories of the proclamation of 1916. As with all the other signatories of the proclamation, he was sentenced to death along with the other rebels. He was shot in Kilmainham Gaol in Dublin on the 4th May 1916 in the early hours of the morning. A couple of hours before he was shot, Grace Gifford and a priest were brought in to Kilmainham and in to the small chapel in the gaol. It was there in that gaol that Joseph and Grace got married. They were allowed about 15 mins together under supervision after the ceremony. Even though she was very young when this happened, Grace never remarried and she died in Dublin in 1969."

Here are the lyrics to Grace:

As we gather in the chapel here in old Kilmainham Gaol,

I think about these past few days, oh, will they say we've failed?

From our school days, they have told us we must yearn for liberty,

Yet, all I want in this dark place is to have you here with me.

Oh, Grace, just hold me in your arms and let this moment linger,

They'll take me out at dawn and I will die.

With all my love, I place this wedding ring upon your finger,

There won't be time to share our love for we must say good-bye.

Now, I know it's hard for you, my love, to ever understand,

The love I bear for these brave men, my love for this dear land,

But when Pádhraic called me to his side down in the G.P.O.,

I had to leave my own sick bed, to him I had to go.

On this May morn, as I walk out, my thoughts will be of you,

And I'll write some words upon the wall so everyone will know,

I love so much that I could see his blood upon the rose.

Sean Ó Riada was an Irish composer from Cork who wrote Mise Éire (“I am Ireland”) as the score to George Morrison’s 1959 film documentary on Ireland’s struggle for independence from the late 19th century to the early 20th century. The film brought together historical footage from the events surrounding the 1916 rising. It was then released by Gael Linn to great acclaim at the 1959 Cork Film Festival and was the first feature-length Irish language film.

The music draws on traditional Irish tunes and “sean-nós” and the original recording is conducted by Ó Riada himself. The music brought him national acclaim and allowed him to start a series of programmes on Irish radio called Our Musical Heritage. The 5 movements from the orchestral suite are named as follows:

The suite contains some of the most stirring Irish orchestral music ever written which portray themes of sorrow, loss and triumph all in one. The first movement of the suite opens with a famous solo on the French Horn which you can listen to here:

At the time of the Easter Rising, many Irish men joined the British forces to fight during the First World War. The song The Foggy Dew is a call to the Irish to fight for the cause of independence for Ireland rather than in the World War.

Led by James Connolly and Padraig Pearse, the Irish nationalists decided to take advantage of the British war effort with Germany to stage a rebellion in pursuit of Irish independence. The ultimate triumph of the British government in defeating the rebellion and the subsequent execution of the nationalist leaders fuelled a sense of alienation the Irish public had with British rule.

Canon O’Neill wrote “The Foggy Dew” to reflect this sense of alienation as well as the sense that more Irish should have stayed to fight in the rebellion rather than fight as part of Britain’s war effort. The lyrics are as follows:

As down the glen one Easter morn

To a city fair rode I

There armed lines of marching men

In squadrons passed me by

No pipe did hum, nor battle drum

Did sound its loud tatoo

But the angelus bells o'er the liffey swells

Rang out in the foggy dew

Hung they out the flag of war

Than at Suvla or Sud-El-Bar

And from the plains of Royal Meath

While Britannia's Huns with their long range guns

Sailed in through the foggy dew.

Their bravest fell and the requiem bell

For those who died that Eastertide

In the springing of the year

While the world did gaze with deep amaze

At those fearless men but few

Who bore the fight that freedom's light

As back through the glen I rode again

And my heart with me fell sore

For I parted then with valiant men

Whom I never shall see 'more

But to and fro in my dreams I go

And I kneel and pray for you

For slavery fled a glorious dead

When you fell in the foggy dew

Called "The Soldier's Song" in English, Amhrán na bhFiann is Ireland's national anthem. The music was composed by Peadar Kearney and Patrick Heeney, the original English lyrics by Kearney, and the Irish-language translation, now usually heard, by Liam Ó Rinn. The song, as "A Soldier's Song", was composed "early in 1910 or late in 1909", with words by Peadar Kearney, and music by his friend and neighbour Patrick Heeney, who had collaborated on songs since 1903.

Kearney wrote much of the text in the Swiss Café at the corner of O'Connell Street and North Earl Street. The first draft of the text, handwritten on copybook paper, sold at auction in Dublin in 2006 for €760,000.

It was used as a marching song by the Irish Volunteers and Seamus Hughes first sang it in public at a volunteer fundraising concert. It was sung by rebels in the General Post Office (GPO) during the Easter Rising of 1916. Its popularity then increased further among rebels held in Frongoch internment camp after the Rising. The lyrics are as follows:

Whose lives are pledged to Ireland,

Some have come from a land beyond the wave,

Sworn to be free, no more our ancient sireland

Shall shelter the despot or the slave;

Tonight we man the Bearna Baoil

In Erin’s cause come woe or weal,


If you'd like to explore more Irish music in the classroom, why not sign up to our recently revamped Irish music course: